Google’s Webmaster Tools is one of the most powerful tools for site SEO and improving the visibility of your website. It allows us a complex understanding of how Google is crawling and indexing your site – as well as providing an insight into any issues it has encountered. The Crawl Errors report is one of the most powerful features of Webmaster Tools. There are six main categories of errors: Server errors, Soft 404’s, Access denied, Not found, Not followed and ‘Other’. 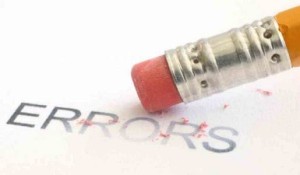 Server Errors are typically 500 and 503 response codes caused by internal server errors. These are typically rogue URL’s. A high number of server errors on your website could lead Google to believe that your site provides a bad user experience and this may harm your search engine visibility.

This report allows you to see which pages Google is being prevented from accessing – either by statements within your robots.txt file or through areas of the site where user log-in is required.

These are effectively 404 errors which are returned when Google attempts to visit a page which no longer exists. While it was previously thought that a large number of 404 errors on your site would harm your rankings, Google has recently clarified its position on this, stating that “Generally, 404 errors don’t impact your site’s ranking in Google, and you can safely ignore them”. These error warnings should therefore be interpreted more as an ‘FYI’ than as something to be actioned.

This category lists URL’s on your site which Googlebot was unable to completely follow. There are generally two reasons why this might happen. Features such as Flash and Javascript might make links difficult to crawl, while search engine spiders sometimes have trouble following unconventional redirects which might result in anomalies such as redirect loops. More information on these errors can be found in Google’s official guidelines around not followed errors.

These include other errors such as 400 Response Codes (Bad Requests). This report is usually best for identifying areas of your site which are causing errors and taking action upon these rogue URL’s.

Matt Humiston
02:47 08 Dec 17
DIFFERENCE MAKERS! I have seen SEO Gazelle turn businesses around. Two reasons to recommend; they deliver great results (try searching Affordable SEO Company) and they take pride in helping companies win. I came across SEO Gazelle when my friend's business took off, it started slow and grew steadily. I had to see it to believe it, it was something to see the impact and results.

APT Speed
21:54 20 Sep 17
SEO Gazelle is awesome . Nick was able to help us with development issues and did a great job getting our site running up to speed !!!

Rachael Morgan
02:34 19 Jun 17
My business relationship with Nick has been spot on!!!! He helped me in a jam and his company came through amazingly. I highly recommend anyone who asks me for my recommendation. Thank you again SEO Gazelle!!!!

Asiel Cabrera
18:40 07 Aug 17
I have been working with SEO Gazelle for almost a year and am extremely happy about their Web Development and Search Engine Optimization services.
See All Reviews

Our clients receive 12 Hour Support Monday to Friday, We are here to help solve problems large or small! Visit our Testimonials Page for feedback we have recieved!

If you are looking for SEO services for your company; or just want to say Hi, then use the information below to get in touch with us. We have our office number or easy to use contact form listed below!